back to search results

GRACE AT SPEED ... To my eye, one of F1's most aesthetically beautiful periods came just before wings, when designers attained the final expression of their age-old conception of car-as-projectile, a bullet to pierce the air, not wedge itself under it. And among the most satisfying of these was Colin Chapman's Lotus-Ford Cosworth 49. Slim, tidy, deceptively simple-looking, it was a perfect marriage of slender aluminum monocoque with compact V8 — the engine was in fact the rear of the chassis, an elegant engineering solution that would catch fire throughout the racing industry.

One of the vantage points from which you could best perceive the 49's beauty was the old "flying bridge" at Watkins Glen, a gantry platform cantilevered out over the start-finish line (see photo below). It was meant for flaggers and officials, but sometimes pushy photographers could talk their way up there too, and I used to squeeze in as often as I could. From there you enjoyed a viewpoint that was as rare then as it is now.

Of all the places from which I used to shoot at the old home of the US Grand Prix, for me the "bridge" is the one that most clearly says "The Glen." 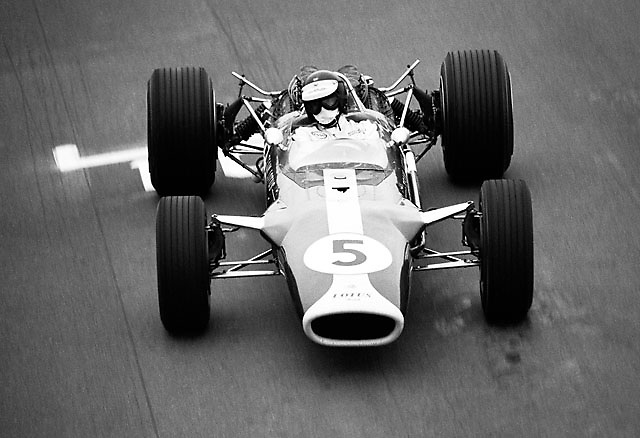